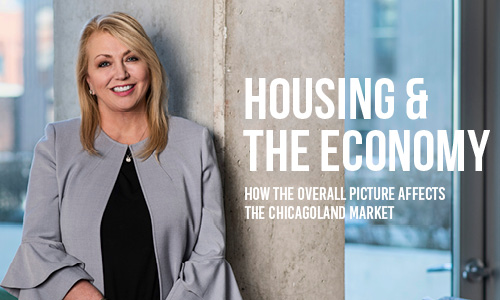 Though it may feel remote from the day-to-day pressures of running a real estate business, the overall economy plays a vital role in the local residential market. Real estate is a cyclical sector of the economy and one that’s dependent on a variety of factors. The job market, earnings and mortgage rates all come into play for consumers who are considering buying a home, as does the availability of desirable homes in areas that are attractive to buyers.

Lately, the economy hasn’t been all that fun to watch. Wild stock market fluctuations in the final weeks of 2018, uncertainty over the impact of economic tariffs and a predicted drop in the gross domestic product are all a bit stomach-turning.

However, while the economy is expected to slow in 2019, a drop into a recession is not in the vast majority of forecasts being released lately. Goldman Sachs anticipates that the rate of economic growth will drop from 2.9 percent to 2.5 percent. Additionally, the Congressional Budget Office expects the gross domestic product will grow by 2.4 percent in 2019, down from the 3.1 percent they projected for 2018.

“You have a broader economy, and how it functions is going to have a big effect on housing demand,” says Geoff Smith, executive director of the Institute of Housing Studies at DePaul University. He adds that factors that impact borrowing power are especially important for real estate professionals to watch. “Interest rates are always a key macroeconomic factor around housing and mortgage lending.”

Nationally, rates on a 30-year, fixed-interest mortgage stand at about 4.7 percent, according to BankRate. In Chicago, rates currently fall between 4.4 percent and 4.8 percent.
While the prospects of purchasing another home at a rate in the neighborhood of 4.5 percent can be daunting to homebuyers who last bought at 3 percent or so, the rate shock effect is not nearly as bad as it’s been in the past.

Debra Dobbs of @properties in Lincoln Park recalls that interest rates were between 13 percent and 18 percent when she started working in real estate in 1984. “Five percent or 4 percent is incredibly cheap money,” she says. “Yes, there was a blip on the screen a couple of years ago where you could get a rate between 2.8 and 3.5 percent, and I understand the differential. This is why I think we’re seeing sluggishness in the market.”

David Bailey, managing broker at Baird & Warner in Lincoln Park, shares Dobbs’ point of view on interest rates. “Everyone anticipates, and I do as well, that interest rates will continue to trickle up,” Bailey says. He advises clients to take a longer view. “Over the last couple weeks we had a little bit of a dip, which is nice. But if I am buying my next condo, townhome, single-family home or whatever, it’s on a five- to 10-year horizon and getting an interest rate at 4.5 percent is a fantastic value. This is the window to act.”

Google and Amazon aren’t the only companies that have been impressed by what the Chicago metro area provides in terms of amenities, such as an effective public transit system and easy access to two major airports, and these conveniences improve the economic picture as far out as Fox Valley. Debora McKay, team leader at @properties in St. Charles sees reasons for optimism in the number of companies relocating to Illinois, and to the Chicago area in particular.

“I’ve worked with a couple of major employers’ transferees this past week, so that is encouraging,” McKay says. “We’re probably never going to be Tennessee or Florida because they have no income taxes, but I think people really like this area and the people who come here love 75 percent of everything this area has to offer.”

These commercial moves impact the residential market too. Downtown core areas are particularly attractive to employers because they’re centralized. This interest drives homebuyers to look for properties with easy access to those areas, near transit corridors that can get them there relatively quickly and efficiently.

“One of the effects that has on housing is the growing demand for housing around the core and around transit corridors where there’s access to downtown,” DePaul University’s Smith says. “That’s where you see a lot of new development occurring and where you’ll probably continue to see new development and growing demand.”

Inventory remains tight across the nation, though modest increases are expected this year. In its 2019 National Housing Forecast released at the end of November, realtor.com forecasted that prices will grow at a 2.2 percent rate and inventory will increase at a rate below 7 percent.

However, most of that growth is expected to take place at the upper end of the market. Smith says that one factor contributing to the depressed supply at more affordable levels is the presence of real estate investors who are snapping up lower-priced properties. Those investors had previously taken advantage of the huge inventory of foreclosed properties on the market.

“Now that the foreclosure pipeline is dried up, investors aren’t going away,” Smith says. “They’re still looking for value opportunities in the real estate market. This is leading them to target a lot of affordable, lower-cost neighborhoods, especially those that have access to certain amenities, especially mass transit or public investment projects or large place-based investments.”

The threat of a slowdown

In the Chicago region, growth is expected to backslide. Realtor.com’s forcast predicts that sales will decrease by 7.4 percent and prices will drop more modestly, by about 1.9 percent.

In some ways, the relatively stable market in the Midwest is a blessing. “Our ebbs and flows have been less stressful than on the West Coast and even Florida,” McKay says. “Some of those areas were really hot. We have not experienced those changes and that’s great. We also haven’t bounced back so much either to the high of our markets in 2006.”

But McKay is concerned about how economic volatility and the combative nature of national politics may have a dampening effect on home purchases in the region, particularly following fluctuations in the stock market and leading into the 2020 presidential election. “The challenge is getting these Midwesterners to feel comfortable. There are plenty of people who could buy and move around but I think a lot of people are just taking the wait-and-see method,” she says.

Of course, no one real estate market can ever be 100 percent positive for all parties in every transaction. The slower market represents a transition to a more balanced one, and that means the onus of explaining the changing market falls on those in the industry. “That is a competitive advantage for the people who truly treat this as a profession,” Bailey says. “Our role as real estate brokers is to inform our clients on what those opportunities are in the market. Sellers need to be a little more prepared in what they need to get their homes ready to sell. Our buyers need to be ready to act.”

Chicago has experienced a significant jump in luxury housing prices in recent months. According to Redfin, prices for luxury homes in the city rose by 19.2 percent in the third quarter. Meanwhile, most signs point to a continuation of the inventory shortages that have been plaguing the lower end of the market.

To Smith, the bifurcation of the economy into high- and low-income households is a problem for the real estate industry. “The way the market has been functioning lately, there has been a lot of new development at the high end of the market,” he says. “That’s produced perhaps an oversupply of really expensive housing and a shortage of housing at the lower and middle tiers of the market. I think this is the driving factor behind the affordability crisis that we’re seeing in Chicago and cities across the country.”

Dobbs worries that overpricing could lead to problems in the local market and that the city needs work to create stronger communities. “Chicago is a tale of two cities, in a way,” she says. “We need to wrap our arms around that and figure out how to create communities that are maybe more integrated or where there are job options available for more than just someone who graduates with a high-end degree.”

Still, Dobbs says the amount of new development taking place bodes well for the future of the area. “Builders and especially banks — now more than ever — tend to be a little more conservative,” she says. “They’re looking at the long-term horizon, just like a corporation relocating to Chicago. They’re not looking at what’s on the horizon for a year. They’re looking at where they see the community in five years.” Swimming Against the Tide: An Update on COVID-19 Housing Policy Interventions