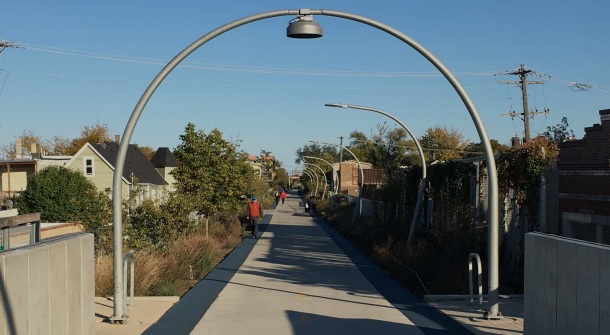 Measuring the Impact of the 606: Understanding How a Large Public Investment Impacted the Surrounding Community examines how the housing market responded to the development of The 606 linear park, Chicago's recent addition to the growing number of "rails to trails" projects nationwide. Although these projects are celebrated for the benefits they provide, they can also accelerate neighborhood change, leading to higher housing costs and increased risk of displacement for lower-income residents.

This analysis looks at how house prices changed for neighborhoods adjacent to the trail and at different points in time related to trail development. In the already strong and stable 606 East housing market, a new amenity had a very limited effect on house prices because demand and house prices were already very high. In lower-income 606 West, the trail had a much more substantial effect by attracting new demand from buyers willing to pay a substantial premium to live near the trail.

These findings have implications for community development practitioners trying to develop a balanced set of policies that will allow cities and neighborhoods to benefit from the success of these projects while also preserving housing affordability and limiting the potential displacement of lower-income residents.

To read the full report, which includes additional analysis and visuals as well as background on how demand changes impact housing affordability, click here.

Since 2012, prices have risen dramatically in 606 West while remaining stable in 606 East. Changing house prices provide a key indicator of demand for housing and potential rising costs that may affect affordability for lower-income households.

The chart below shows quarterly price trends for single-family homes from 2000 to the second quarter 2016 across Chicago, and in 606 East and West within a half-mile of The 606. Key price trend data are summarized in the table below.

These rapid price increases in 606 West are being driven by a price premium buyers are willing to pay for properties near the trail. After The 606 was underway, being near The 606 began to command a premium, but only on the western side of the trail. In 606 West buyers were willing to pay a 22.3 percent price premium for properties within one-fifth of a mile of the trail, which translated to more than $100,000 of the area's average 2015 sales price. The trail’s influence on 606 West house prices dissipates the further from the trail a property is located and becomes statistically insignificant after three-fifths of a mile. The map and chart below visualize the price premium and how it changes by distance away from The 606.

As Chicago and other cities consider future high-profile, potentially catalytic projects like The 606, evidence from this analysis can help inform more proactive and targeted policies to preserve neighborhood affordability. To read the full report, which includes additional analysis and visuals as well as background on how demand changes impact housing affordability, click here. To understand more on how these findings connect to policy and practice, read the accompanying blog Lessons from The 606. For more information on data sources and methodology, click here.

IHS_Measuring the Impact of the 606.pdf